At the back of the Barton Creek Mall
(View map)

Every Saturday 9am to 1pm

Rain or shine (except Christmas )

Here’s something you may not know about Albert Einstein!

"It's not that I'm so smart, it's just that I stay
with problems longer." - Albert Einstein 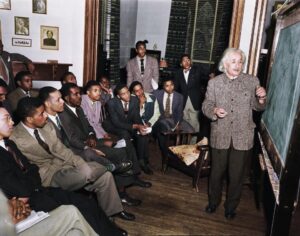 In 1946, the Nobel Prize-winning physicist traveled to Lincoln University in Pennsylvania, the alma mater of Langston Hughes and Thurgood Marshall and the first school in America to grant college degrees to blacks. At Lincoln, Einstein gave a speech in which he called racism “a disease of white people,” and added, “I do not intend to be quiet about it.” He also received an honorary degree and gave a lecture on relativity to Lincoln students.

The reason Einstein’s visit to Lincoln is not better known is that it was virtually ignored by the mainstream press, which regularly covered Einstein’s speeches and activities. (Only the black press gave extensive coverage to the event.) Nor is there mention of the Lincoln visit in any of the major Einstein biographies or archives.

In fact, many significant details are missing from the numerous studies of Einstein’s life and work, most of them having to do with Einstein’s opposition to racism and his relationships with African Americans.

Barton Creek Farmers Market at Barton Creek Square Mall is open from 9 – 1 every Saturday unless the market falls on Christmas Day.
Facebook Twitter